On December 30 I hopped a flight to Ireland to spend New Years with my camp friends before heading to London and Stockholm. Ironically, my flight was delayed so that we wouldn’t arrive too early. The jet stream tail wind was so strong we would have arrived when there would have been no gate for the plane. It was a great flight though, taking less than six hours. We still got in early despite the “delay.”

We stayed at Alice and Phil’s family house in Tramore, on the Irish Sea, near Waterford. It’s a surfing town. Mat and Phil brought wet suits and went surfing on New Years Day.

On the 2nd Mel and I went to Cork. I wanted to see the city. It was a nice trip and a nice city, despite the weather. I took some videos while at University College Cork that I wanted to upload, but it looks like you have to pay WordPress for videos, so I’m not going to do that now. Here are two pictures of the interesting sculptures around UCC: 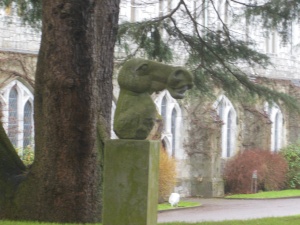 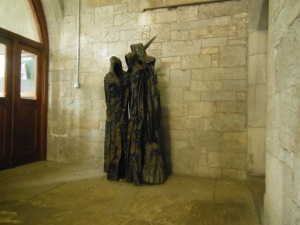 This was my second time in Ireland, and again I found the country and the people very pleasant. It has also been cool with Alice and Phil showing us around their family’s towns. Right now we’re on the ferry to Wales. The sea is very rough. We’re “pitching and rolling” and  I see a lot of green faces. I feel fine for now though. Once I get to the UK I’m hoping to spend some time with Tom Prior, Emma Moran, and Alice Marjot before continuing on to Sweden and my friend Oscar.

4 Responses to New Years in Ireland