This is what most Americans know about Tasmania:

I was in Tasmania over the last weekend with my friends Luke, Catherine, and Mel. We had a great time. The island, and the animals, are nothing like Looney Tunes though. The island itself is small. You can drive from north to south in about four hours. It doesn’t have a very large population, and we found that cell phone service is nearly non-existent outside of the large cities, like Hobart (where we flew in and out of) and Launceston (where we stayed the nights). There are plenty of well paved roads, except many of them are very windy, going up, down, and all around the mountain ranges that criss-cross the island.

Australia itself was founded as a penal colony. Convicts were transported to Australia as a punishment, and they were expected to colonize the land. Tasmania had a special prison at Port Arthur that was used for serious offenders and convicts that committed new crimes after they were transported to Australia. Port Arthur is a peninsula with a narrow isthmus connecting it to the mainland. My friend Sara called it the Alcatraz of Australia – very very difficult to escape, and very few people ever did.

It is quite remarkable what Australia has accomplished since the First Fleet arrived. A country originally colonized by the rejects of the British Empire now has world class cities with some of the highest standards of living in the world. The country certainly has its demons – environmental protection and global warming, relations with indigenous Australians, and treatment of asylum seekers, but no country is perfect. It is even in vouge among wealthy and famous Australians to be able to trace their family back to convicts, some of whom were originally transported to Tasmania and Port Arthur.

In addition to its historical heritage, Tasmania is a natural beauty. It is a cradle of marsupial mammals (including the Tasmanian Devil, which bears little to no resemblance to Taz), and has an impressive amount of national parks. We went to two – Cradle Mountain and Freycinet Peninsula. I was also impressed by all the different types of forests we drove and hiked through. They have forests of tall gum trees, which just makes things look ghostly. They have temperate rain forests which are equally creepy with their stout trees, dark mosses, and fog. Then there were the forested hills and valleys that seemed like they could have dinosaurs waltzing through them. 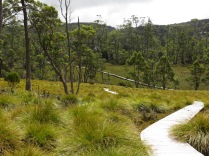 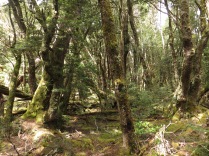 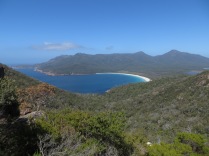 I also have a video from Cradle Mountain, but it was so windy you can barely hear me talking: