Día de Los Maestros is National Teachers’ Day, and it is tomorrow, Sunday June 29, in Nicaragua. Classes are cancelled on Monday to observe the holiday, and most classes were cancelled on Thursday as well so that the kids could put on plays and celebrations for their teachers (classes on the last Friday of every month are already always cancelled for a teacher planning day).

And today I was invited to the teachers-only celebration at one of the high schools that I work at, Instituto Nacional del Occidente. Unfortunately I didn’t bring my camera so I don’t have any pictures or videos, but it was just so awkward and hilarious I just had to write a blog post about it.

There were about 40 teachers there, give or take. There was one L-shaped table in the middle of the auditorium for all of us. When I got there the first questions I got asked by all of the (male) teachers were, “Where is Chelsea?” and “Where is Lauren?” Chelsea and Lauren are my sitemates, both of whom work at the same high school with me (Chelsea works with the English teacher and Lauren has been working on the business curriculum for two years – July is her last month). They are both very popular with males in León. I’m not sure why. 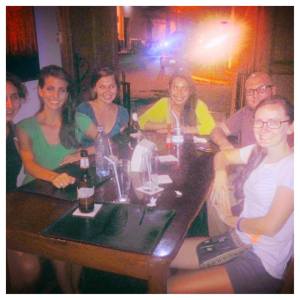 Unfortunately this is the best picture we have of the six Volunteers all currently in Leon. And this pictures was taken in Bar Baro, which burnt down. And with Lauren leaving soon this picture can never be re-created with a decent camera, even in a different location!

So once it was established that Lauren and Chelsea were unfortunately out of town the festivities began. There was a live band. But they were bad. Really really really bad. Think of the mom and pop band that comes on at the county fair after the hog show is over bad. This particular group was actually a husband and wife (he played two keyboards, she sang) and their daughter, who I would say was about seven. She occasionally sang too. I’m just trying to paint a picture of my afternoon for you, not lambaste this family (who seemed to be very popular with the teachers, I will say).

With the dance music blaring we sat down to eat. And there was a lot of food. Chicarones, yucca, enchiladitas, frijoles licuados, tamales, queso, chicken, rice, pasta salad, and bread. Plus there was soda, and the Assistant Principal started whipping out handles of rum and cans of beer. In between the eating and drinking they also all danced. The men, the women, the old teachers, the young teachers, the seven year old singer girl, me, the principals, everyone. This is a series of two texts that I sent to Chelsea to explain the scene to her:

“Carlos is dancing. The dance floor is burning and Carlos Rizo is the cha-cha phoenix emerging from its ashes.”

Carlos is the Principal of the school and a big supporter of the Peace Corps. He was a counterpart teacher in the Small Business Development program before become a principal.

And that was it. 2.5 hours in I decided to hop on my bicycle and head out. They were still going strong though. It’s a good thing this party was today, not on Monday, otherwise we probably wouldn’t have school on Tuesday! Although I shouldn’t speak too soon. The party for the whole city is tomorrow, but it starts at the Cathedral, before heading to the theater and then City Hall. I hope they get a different band.

I woke up today with another case of temblorrhea (sans the temblores). The most likely culprit is the food from Día de Los Maestros.