This post is the third in a series of posts I am calling Incidents of Travel Past. and today I take you to the Aegean Sea, circa 2012. 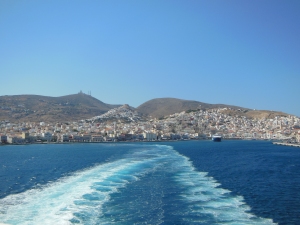 I had been traveling with my friend Steve, but he had to leave back for the US when we left Crete. My plan was to fly out to Rhodes, then ferry back to Athens by way of Santorini.

To get to Santorini I had to take an overnight ferry from Rhodes to the small island of Syros, and then grab another ferry to Santorini. So one night I got on that first ferry in Rhodes and disembarked at the small port of Syros at around 3 AM. I was going to have to wait until later in the morning for the ferry to Santorini.

A few other people got off the ferry in Syros. Not many. There was a group of English speaking guys around my age, so I went over to them to see if they were also waiting for the ferry to Santorini. In fact they weren’t. They were all British and were actually planning on spending a day on Syros. That surprised me since Syros isn’t known as a tourist destination. Nevertheless, they seemed nice and were people I could hang out with until the ferry left later in the morning, so I asked them what they were up to for the next few hours.

Their plan was to find a beach to sleep on. It sounded like a plan to me, so I decided to join them on their quest for a beach. After walking around for about an hour this is the best that we could find: 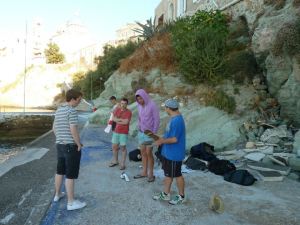 About as soon as we laid down on our concrete slab in front of the sea to sleep the wildlife began to attack. There were bugs, birds, cats, and what we are all convinced is a monkey (I have no photographic proof). Needless to say we didn’t sleep much. I think by 6 AM we were up and looking for a café.

At the café I decided that it would actually be a good idea to tromp around Syros for a day with my new crew of British friends rather than head to Santorini on the ferry that day. Having no plan we rented cars for the day and set out look for the beaches that alluded us the night before. We did eventually find a town on the other side of the island with a nice hotel owned by a French lady and what I would describe as the nicest beach I have ever been to in my life. That night we watched the first England match of the Euro Cup.

… And the next morning I missed the ferry to Santorini.

I never made it to Santorini on that trip, but I had a really fun time on Syros, and I wouldn’t trade my adventure for time on Santorini. It was actually John, one of the British guys, who inspired me to apply for the Peace Corps. 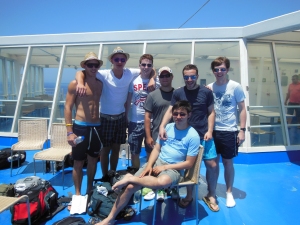 5 Responses to My Aegean Odyssey