One of my newest clients is another tourism cooperative that manages the Telica Volcano. I made a plan to go meet with them yesterday and do some business training and strategic planning with them. I showed up a little early, resplendent in my Peace Corps polo shirt, jeans, and my backpack. Right at 8:00 AM my contact showed up where we decided to meet, except he was on a horse and he had another horse with him. “Who is the second horse for?” I asked Donald.

Naturally, I then asked, “Where are we going?” 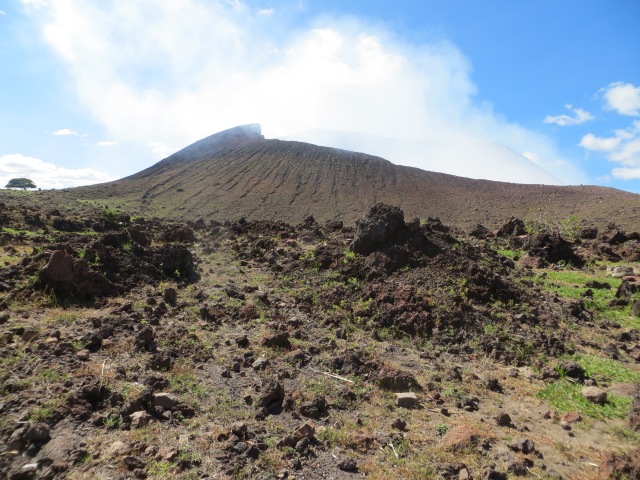 Yes, to the top of the volcano

Donald assured me that on horseback the trip would only take an hour and a half, so I got on Vaquita (Calf, in Spanish), and set off up the volcano in my not-loosest pair of jeans. The scenery was beautiful. Volcanic valleys with cornfields and palm trees. Unfortunately I couldn’t take any pictures because I was holding on to my saddle tightly so I wouldn’t fall off. Vaquita turned out to be a bit of a vaga (wanderer).

The whole trip up the volcano I heard these little British voices in my head telling me how to ride properly.

Right now, keep your head up.

Keep your back straight.

No chicken wings! Keep those elbows in.

On my way up I learned a ton from Donald. The 12 members of the cooperative (11 men, one woman) are all farmers in extremely small communities near the volcano. They don’t have electric, water, or roads. The only access is on horseback. They subsist on raising mainly corn and beans. They are poor both in the traditional sense of not having much money, but also in the sense that their isolation makes them very vulnerable – health-wise, economically, in all respects. For instance, they have a school, but it only goes up to sixth grade. After that the kids have to find schools in other communities to attend, which is a real deterrent to graduating with a degree.  However, after meeting them I never got the sense that they are complaining about their situation or themselves feel poor. They are just community members who saw an opportunity and are trying to seize it.

The last time that Telica erupted was 2011. Donald told me that they did have to evacuate the communities, but the authorities did let one person remain in each household. And an hour and a half later we arrived at the top of the volcano, the same one that erupted three years ago, for our business meeting. All of the other members of the cooperative arrived one by one, all on horseback. I felt like it was the first meeting of the Fellowship of the Ring with everyone arriving on horseback in Rivendell. 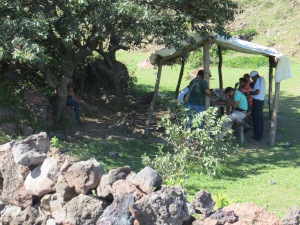 My office for the day

The meeting went great. I showed them how they could keep track of the money in their general operating fund and fairly distribute profits among the members. We also talked about their goals, short-term and long-term, and how they could start offering some more services. I’m going to follow-up, probably for a two day visit, in January.

The weather was amazing the whole day. The sky was more clear than the first time I went to Telica and the views I had up and down the Maribios were spectacular. Unfortunately, I’ve found that my camera just does not capture long-distance mountains great, but I managed to snap a few good ones today. 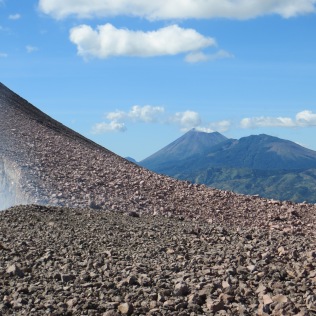 Today my lower body is in utter revolt from the three hours on horseback, but I couldn’t be happier about how things went or the possibilities for the future with this group of business-people.