Our first stop after getting to León was Cosigüina Volcano. Cosigüina used to be the tallest volcano in Nicaragua. Then somewhere between 30,000 and 10,000 years ago it blew up, and now it is a short crater with a lake in the middle. Nevertheless, it is an arduous hike, probably because it is nestled in the hottest corner of Nicaragua in the far northwest of the country, on a peninsula that juts out into the Pacific of its own making.

Our trip began at 5:00 AM with a two hour drive out of León. When we got to Potosí at the base of the volcano we began our hike up. It was hot. Like 100+ hot. And they have been suffering from brush fires over the last year. There was ash everywhere and at a few points I could still smell smoke. I certainly would not call it a pretty hike. 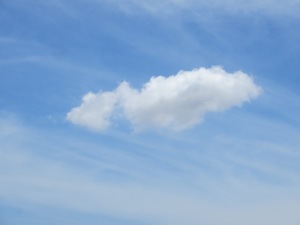 We did it all for the view at the top. Cosigüina juts out in the Gulf of Fonseca, which is shared by Nicaragua, Honduras, and El Salvador. Nicaragua and Honduras share a land border, while Nicaragua and El Salvador only share a maritime border across this gulf. From the top we could see all three countries (although it was a bit hazy), plus we had a crystal clear view of the crater lake in the middle of the extinct volcano.

The shrimp nurseries of Cosiguina Peninsula, with the faint outline of San Cristobal Volcano (Nicaragua’s tallest) in the background

This part of Nicaragua is the cradle of the Contra War. Reagan originally sold the Contra War as a means to prevent, or “interdict,” arms shipments from Nicaragua to El Salvador. The Communists were victorious in the Sandinista Revolution, and they sought to support their ideological brethren in El Salvador (which unfortunately suffered its own long and bloody civil war that lasted into the 90’s I believe). Now Nicaragua and El Salvador do not share a land border, and Honduras was staunchly in the American sphere of influence, so any arms shipments would have had to travel by boat from this part of Nicaragua to El Salvador.

Of course “interdiction” was a complete sham by Reagan and he was actively coordinating attacks on Nicaraguans having nothing to do with El Salvador, but nevertheless, I can’t help but point out that this little poverty-stricken, forest fire, flood, earthquake, volcano, and tsunami stricken corner of Nicaragua, lit the first match in an international affair that brought the Teflon Man to his knees. 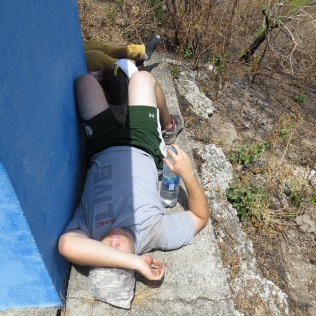 Aaron found the only shade available, next to the seismograph at the summit

The crew, with our guide’s grandson, Ludwin, the smartest ten year old that I have met in Nicaragua

I also took a video from the summit: