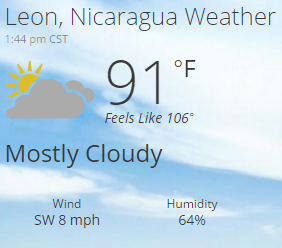 You know those one or two days every year in NY when it is 100° and everyone freaks out and the news has extended coverage of how the Port Authority is adding extra buses and the city is setting up spritzing stations? Well it’s been that hot here for a month now.

I knew today was going to be bad when I woke up in the middle of the night from the heat and took the unprecedented step of turning up my fan to “3.” Speed setting three is just too loud usually to sleep. I was rather unsatisfied last night, just feeling that hot air was continuing to be blown on to me, just faster.

It’s now midday and I have showered twice already. This morning at school some girls were complaining that it was too hot to work, so I took the opportunity to make an impassioned speech about León has been around for more than 500 years, is one of the oldest cities in this half of the Earth, has the largest church in Central America, and is the cradle of the Nicaraguan Revolution, and now, after all that time and accomplishments, it has finally become too hot to work. I pumped my fist throughout the speech in classic Latin American dictactor fashion. Chávez would have been so proud.

I have been spending a good deal of my free time at the air-conditioned La Colonia, particularly when I am studying (GMAT folks) and I have no interest in entertaining Evelyn (see the first video below) and enduring the heat.

And then I saw this and got reminded that usually there is someone out there who has got it worse:

Zach lives in Chinandega, which is the next and last big city north of León. Due to ocean/wind current, Chinandega is hotter than León (and they say the lowlands of El Salvador have even got Chin beat). And for the record, we have water today, so I showered without incident. I am taking my raincoat out with me this afternoon, just in case it does rain (which would be bad for my roommate Christina, since this has not been completely patched yet).

You know nothing, Ned Stark

UPDATE, 10:53 PM: Rain! And me rushing across the house in my boxers to save Christina’s computer from her exposed ceiling. Now I am sweaty again. I guess it is time for shower number four.