UPDATE, Sunday, June 21: All photos and videos are now up

One truth that has become evidently apparent to me over my 15+ months in Nicaragua is that the longer you live somewhere or get to know a place, the more you find that you want to see and do. For me this is true of New York, Northeastern Pennsylvania, Delaware, and Washington DC. There are very few places that I have ever been (Camperdown, Victoria, Australia immediately comes to mind as an exception to the rule) where I wouldn’t like to see and experience more.

And this truism couldn’t be any truer for Nicaragua. Before finding out I would be heading to Nicaragua I knew frighteningly little about the country. I knew three things:

I didn’t know the full William Walker story, I didn’t know who Ortega was, and I barely had the slightest understanding of Iran-Contra. And I certainly did not consider Nicaragua as a vacation destination. I remember that when I was planning my Central American graduation trip with Tom and Ty we considered, momentarily, Nicaragua. Tom mentioned that it would have loved to “rough-it through Nicaragua” for a few weeks. I literally imagined bushwhacking through jungle, stopping at occasional remote towns and tourist destinations. I had no idea what Nicaragua was actually like, or that there is a somewhat well-established tourist trail.

And now, I am a fount of Nicaraguan factoids. I can tell you about William Walker and his connection to Grand Central Station in Manhattan, I can give you my opinion of Daniel Ortega, and I can extemporaneously talk about Reagan, and his Iran-Contra Affair. I also can tell you how to get from León to Somoto in one morning, or if you can hike Cosigüina Volcano without staying the night at the base.

Which takes me to my current whereabouts – Charco Verde, Ometepe Island, Rivas, Nicaragua. Last August I didn’t even know that Ometepe Island existed. I knew that Lake Nicaragua existed. I had seen it on maps many times, and remember having to fill in Central American maps in high school. And I suppose I had seen, if not consciously noticed the small dot on the map, corresponding to Ometepe Island. Looking back on it, Ometepe is sort of like that island in the lake in Game of Thrones in the Riverlands; I think it is called the God’s Eye. Or at least that is the name of the lake. Could Harrenhall be on its shores? Anyway, back to Nicaragua/Ometepe. Although I must have seen Ometepe on maps, I certainly didn’t know the name of the island. Or its volcanic origins. Or its wonderful natural beauty.  But now, after getting to know Nicaragua, I love Ometepe, and find myself here for a second time. And the more time I am here, and the more time I spend in Nicaragua conversing with locals and other Volunteers, and reading about the country, the more I find out there is to see and do on this little volcanic island. In some ways it is good that my time in Nicaragua has an expiration date. It forces me to take advantage of my time, make lists, and check things off of them. Without those expiration dates, sometimes we just leave things until it is too late.

This particular week I actually find myself on Ometepe for work. The Peace Corps Nicaragua Small Business Development Program is hosting a tourism business development workshop here at Hotel Charco Verde. I personally invited three clients from León to the event:

In addition, we are joined here by a number of other tourism operators from around the country:

Throughout the week they will be receiving talks and consultations on strategic planning, administration, marketing, networking, and customer service (along with my colleague Robert, I will be facilitating the customer service session). I think tomorrow a government official is coming to talk about tourism in Nicaragua, in general.

Concepcion, back in December, before it started erupting

15 months I didn’t even really know that Ometepe existed, and now I am ecstatic to be back on the island (whose active volcano has registered more than 2,000 eruptions/emissions in the last month and a half). Ometepe is the only place in Nicaragua where I’ve felt that tourists are so welcome, or just so commonplace, that they just blend in and seem like local wildlife. No shoes, no shirt, no problem. In León the locals think so badly about foreign backpackers that I get asked why Americans never shower (I politely tell them that it is the Europeans that don’t shower – they have just given all White people a bad reputation). In Granada tourists are like herds of cattle being shuttled along by the ranchers. They’re happy the have the cattle, but would simply prefer that they didn’t smell so bad or poop everywhere. Even in Río San Juan, I got the sense that they were extremely happy to accommodate the tourists that are arriving in greater and greater numbers every year, but they were still uneasy and unsure about what the ‘gringos’ want.

But Ometepe is nothing like that. A local carefree attitude suits backpacker tourism well. This is, after all, an island that was ordered to evacuate during the Somoza-era due to fiery eruptions on Concepción. Boats were sent, not a single person left, and consequently, not a single person died. With that attitude, I don’t see why they would mind some shoeless hippies walking around, or to come up with some cool restaurant concepts, like vegetarian, or all-organic pizza. 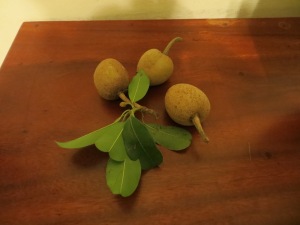 I call nispero the brown sugar fruit, because the flesh is very sweet, brown, and reminds me of brown sugar

We’re staying at Hotel Charco Verde, which is a nice hotel on the beach. One Volunteer broke his wrist and unfortunately could not come to the workshop, and I was going to room with him, so I actually have my own room, which is a rarity in the Peace Corps. It reminds me of being back as a consultant and having hotel rooms all to myself, the bed next to mine completely unoccupied except for my dirty clothes. However, if I stepped out of my room now, I wouldn’t be greeted by another room across the hallway, but instead a sky filled with starts (unfortunately, we really don’t get many stars in León since there are a lot of lights at now). And during the day, there is a nispero tree about a hundred yards away with rapacious howler monkeys swinging around and tossing unripe nisperos at us if we get too close to the tree.

Across the lake, on the coastline, there is a long line of large wind-generating windmills. And they are set with blinking red lights so that low flying aircraft and UFO’s don’t strike them. However, from our-point of view on the island and with the wind blowing, the turbines block the lights in weird patterns. It looks like aliens are trying to send us a message in morse code. It reminded me of the universal tonal signals from Close Encounters of the Third Kind.

So that’s what I’m up to this week. I’m lucky enough to be back on Ometepe for work this time (which means my trip is funded by taxpayers and our Chinese bondholder-overlords). And in terms of work, other than having an excellent workshop, I have specific hopes for each of my clients that are here. For Haldor and his massage business, I hope that he can formulate on his own a coherent plan for growth in the future. For the Telica Cooperative, I hope that Alfredo (the member accompanying me) creates a vision for how he wants his cooperative to operate, plus that he benefits from the experience of other business owners with similar enterprises in other parts of Nicaragua.

As for the cooperative at Cerro Negro, I have had a lot of trouble organizing them and convincing them to work together on a project or goal. In addition, their President, who is here with me, is all vision but no plan. I hope that first, she can come up with a plan for some projects she would like to see in their future, and more importantly, that we can work together to unite the cooperative to work together to realize the plans that she will hopefully be putting together.

And so I leave you all, my friends, family, and stranger-readers, with some advice. Get out and experience what your home has to offer, whether it be natural, cultural, or both (unless you are from Camperdown. If you are from Camperdown leave. Get out. Get out now while you still can.). You don’t need to try to visit as many places as possible. It has been just as fulfilling for me to experience as much as possible in just one place. Maybe you too will have Close Encounters of a Howler Monkey Kind.

As for me, I will be here until Friday, when we head back to the mainland. I will probably stay in Managua on Friday, but I will definitely be back in León by Saturday night for the Carlos Mejía Godoy concert (expect a blog post on Nicaraguan folk music coming soon).

A mini photo gallery of the cruise over to Ometepe: 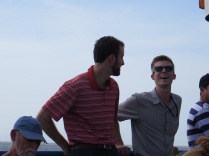 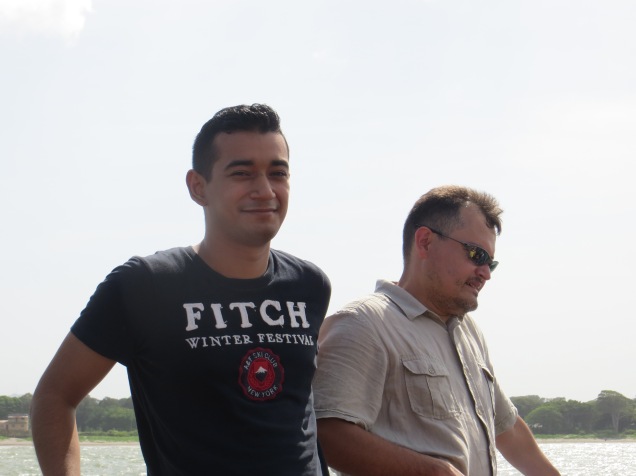 3 Responses to Close Encounters of the Howler Monkey Kind