This weekend brought me to the farthest reaches of my department to the town of Achuapa, where two Volunteers live, Mary, a Health Volunteer who came to country in my group, and Ruben, an Environment Volunteer from the group prior (rumor has it that they will be getting a TEFL Volunteer from the new group that arrives in country this Wednesday). I had wanted to see their site, and this weekend provided an excellent opportunity, since there was a music festival.

The festival was nice. It had an environmental theme and there were a lot of acts over two nights. It was mainly acoustic folksy stuff with conga drums, but I can’t complain about a free concert. By Saturday night there were 11 Volunteers at the concert, and we also ran into a Peace Corps staff member while we were there. 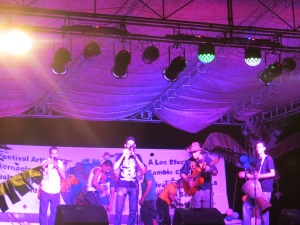 Achuapa is known for its production of sesame seeds, and there were some local tradespeople selling tahini, sesame oil, and other sesame derived products. During the day on Saturday we got a chance to traipse around Achuapa and its surrounds. It is getting up towards the mountains, so it is cooler than León (still hot though), and it it greener as well. 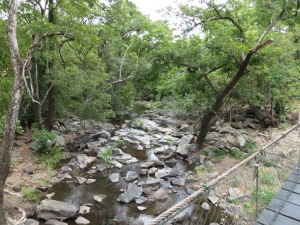 Unfortunately I don’t have much else to say about Achuapa or the festival. I’m grateful to Mary and Ruben for inviting us all for the weekend and putting us up. This coming week for me is busy, with some interesting diversions. On Tuesday I will be a judge in the English Singing Contest at the local high schools. I don’t know what to expect, other than Nicaraguan high-schoolers singing English language songs, but I will be sure to report in afterwards. And Thursday is the Gritería, which I hear is somewhat like Halloween but only takes place in León and celebrates the Virgin Mary, not death. Again, I will be sure to report in. 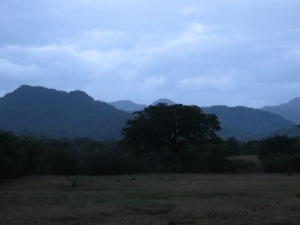