Earlier in the week, on my three month “anniversary” in country, I asked anyone who wanted to comment on my post and ask me what they want me to write about. So far, the only response came from my friend Johnny B.

Well, the new season of Survivor is in Nicaragua… any survival tips?

How have the people you lived with and come into contact viewed Ortega? Where does his support lie/wane? Also, I know drug laws are very lax there and Nicaragua right along the cocaine pipe line. Have you experienced anything with that? (Not physically experiencing drugs, I mean the drug trade)

I’ll start with Survivor. I didn’t know that Survivor was going to be in Nicaragua, but a quick internet search pointed out that it is going to be in San Juan del Sur. I’ve never been down to San Juan del Sur yet, but what I do know is that it is the most developed, touristy, American, expensive city in all of Nicaragua. President Carter literally vacations there with his grandkids: 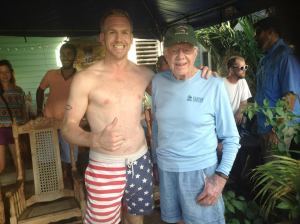 That’s Tom, a fellow Volunteer and Delaware grad, who ran into Jimmy around New Years

Ideas that Jeff Probst could use to actually make Survivor: Nicaragua realistic:

I just don’t see San Juan del Sur being the ideal location for a survival show, that’s all.

On to John’s other topics. As for Ortega, I don’t think that this is the right medium for me to talk Nicaraguan politics. I did get a chance to here Ortega speak though (a snippet of the speech here and more about the occasion here). I also have an Political Encyclopedia of Nicaragua. 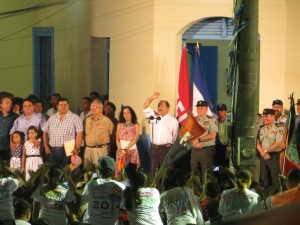 As for the drugs, I will start with a funny story I heard on the news, just because it is funny. This Nicaraguan kid (20 or 21 years old) buys a ton of dope from from dealer for super cheap – something like the equivalent of $4 or $5. He stuffs it in his backpack and gets on the bus. He is acting awkward on the bus, probably because he has a pound of weed in his backpack. Someone notices his odd behavior, and the police get called. They search his bag and find the pot. Except… it was actually horse poop. The kid got conned by the dealer.

But really, no, I have not been affected much by drugs or the drug trade. Some of the teachers that I work with have told me that occasionally the students get caught with weed or dealing, but I haven’t seen any of that. Besides, that’s better than where I went to high school. A few years ago my old English teacher was caught dealing to other teachers in the school!

Luckily, Nicaragua has not become as engulfed in the drug trade or its violence as its neighbors to the north – El Salvador, Honduras, Guatemala, and Mexico. Most of the drug trade in Nicaragua is centered on the Caribbean Coast. The northern half of the coast has gotten very dangerous, so much so that Peace Corps Volunteers are banned from going up there (just as we are banned from going to El Salvador, Guatemala, and Honduras). The southern portion of the coast is definitely dealing with the drug trade, but so far it hasn’t gotten too bad from what I hear. Plus USAID has some programs in place on the Caribbean Coast to expand opportunity and dissuade youth from getting involved in the drug trade.

I hope that answers your questions John. Let me know if you want any more info.